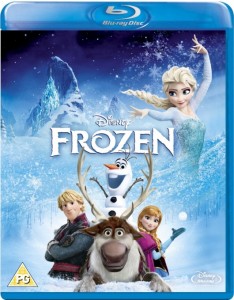 Officially now the highest-grossing animated film of all time, Disney’s Frozen is a perfect piece of high-definition family entertainment this Easter. And we have a copy to give away for this week’s Blu-ray Monday contest.

Beautifully animated comedy adventure Frozen sees fearless optimist Anna set off on an epic journey — teaming up with rugged mountain man Kristoff and his loyal reindeer Sven — to find her sister Elsa, whose icy powers have trapped the kingdom of Arendelle in eternal winter. Encountering Everest-like conditions, mystical trolls and a hilarious snowman named Olaf, Anna and Kristoff battle the elements in a race to save the kingdom. As well as being Disney’s biggest box office hit ever, Frozen took home Oscars for Best Animated Film and Best Original Song for ‘Let It Go’.

A big part of Frozen’s success is its rip-roaring soundtrack – embodied so well in the award-winning Let It Go. Spectacular songs have always been a key ingredient in Disney movies over the years – from The Jungle Book’s Bare Necessities to Mary Poppins’ tongue-twisting Supercalifragilisticexpialidocious. The Lion King’s unforgettable soundtrack, penned by Elton John and Tim Rice, propelled it into theatres around the world, and Aladdin’s toe-tapping numbers like Friend Like Me and A Whole New World are next, with a new stage show on Broadway. But what’s your favourite Disney song? Which makes you laugh most, and which makes you cry? Let us know about your favourites in the comments below.