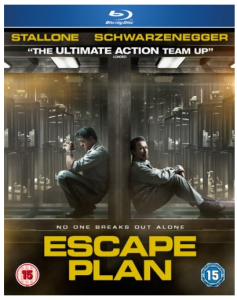 It’s that time of the week again, and for this week’s Blu-ray Monday we’re giving you the chance to get your hands on Escape Plan, one of the biggest action movies to hit the box office last year.

Legendary action heroes Arnold Schwarzenegger and Sylvester Stallone are back with more death defying stunts, bruising battles and nail biting chases. Stallone stars as Ray Breslin, a high security specialist paid to break out of prisons to highlight weaknesses in their apparently escape-proof systems. When he’s tasked with breaking out of the most high security prison in the world, he encounters convict Emil Rottmayer (Arnold Schwarzenegger) and the pair realise they’ve been unfairly incarcerated. The dynamic duo is then forced to concoct an Escape Plan that will push them to their limits.

Escape Plan sees original action heroes Sylvester Stallone and Arnold Schwarzenegger join forces for an explosive reunion. So for this Blu-ray Monday, we want to know who your favourite action movie hero is. Whether it’s Stallone’s out of control Rocky from Rambo, or Schwarzenegger’s deadly Terminator? Or maybe you’re a fan of other iconic 80s action heroes like Bruce Willis’ hard as nails Officer John McClane from Die Hard, or Sigourney Weaver’s Ellen Ripley from Alien? Maybe you’re a fan of more modern heroes like Angeline Jolie’s Lara Croft or Uma Thurman’s deadly Bride from Kill Bill? With so many to choose from, we’re excited to hear your suggestions!