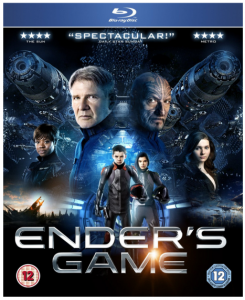 Set 70 years in the future, earth has been invaded by the Formics, a technically superior insectoid species looking for water. It falls on 11 year old boy genius and master gamer Ender Wiggin (Asa Butterfield) to save the human race. Harrison Ford stars as Colonel Graff, a military official who must help Ender prepare for battle. An adaptation of Orson Scott Well’s best-selling novel, this film will give you a “front row seat in what is a powerful, disturbing and thrilling experience”. With “grand visuals”, a booming DTS-HD Master Audio 7.1 soundtrack and a whole host of special features including commentary from director Gavin Hood, this film seems like it was made for Blu-ray.

Harrison Ford makes another sci-fi appearance in Enders Game, so this week we wanted to know what your favourite Harrison Ford character is, and what you’d like to see from him next. Are you keen to see him return to some of his most successful movies like Star Wars, Blade Runner and Indiana Jones? Or would you rather preserve your memories of the original films and see Harrison do something new? Harrison recently appeared in Anchorman 2, so maybe you’d like to see more comedy appearances from him?