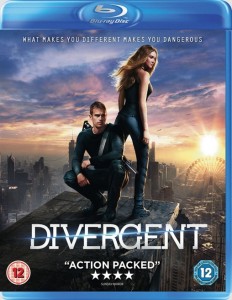 For this week’s Blu-ray Monday, we’re giving away a brand new copy of the latest young adult adaptation, Divergent.

Divergent, based on Veronica Roth’s novel, is set in a futuristic Chicago where society is divided into five factions based on personality type. In this world, all sixteen year olds must take a test and choose where they belong. But the test is a problem for Tris Prior (Shailene Woodley), who finds out she’s classed as Divergent – a danger and threat to this seemingly perfect world. As she works to hide this deadly secret, a dangerous conflict emerges between the factions which threatens everyone she loves. Divergent stars an impressive cast including Kate Winslet, Miles Teller, Jai Courtney and Maggie Q alongside young leads Shailene Woodley and Theo James.

Divergent presents yet another dystopian view of the future, in which humanity groups into factions depending on your personality. But which on screen vision of the future left the biggest impression on you? Do you still have nightmares about what the world will be like after The Terminator’s judgement day, or when artificially intelligent robots walk alongside us, like in I, Robot or Blade Runner? Would you volunteer as tribute for your District if you lived in the world of the Hunger Games? Or would you prefer a life of hoverboards and self-tying shoes, as witnessed in Back to the Future Part II (which terrifyingly, is set in 2015)? Share you suggestions below!