For this week’s Blu-ray Monday, we’re giving away a brand new copy of Deadpool, the box-office sensation from earlier this year which has rewritten the rules of the superhero genre.

Ryan Reynolds stars as former Special Forces operative turned mercenary Wade Wilson, who after being subjected to a rogue experiment that leaves him with accelerated healing powers, adopts the alter ego 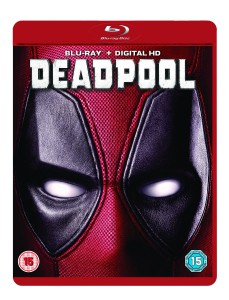 Deadpool. Based on the Marvel comic of the same name, Deadpool brings his unique brand of fourth-wall smashing irreverence to the big screen in some style. Featuring outrageous jokes (often at the expense of the cast and crew) and blistering action, Deadpool shakes up what you’d expect from the superhero movie template – and audiences love it, as its record breaking theatrical run proves.

As usual you have two chances to win. For your first entry, retweet one of our competition posts. Then for a second entry, leave a comment below in response to the following question:

Deadpool proved that audiences have an appetite for more darkness and humour in comic book adaptations, breaking box office records in the process. With so many more superhero movies on their way – from the continuing adventures of the Avengers, sequels to hits like Ant-Man or Guardians of the Galaxy, franchise reboots (yet another new Spider-Man and Ben Affleck’s take on Batman) and the full big screen debut of the legendary Justice League – we want to find out what you want from the next crop of comic book adaptations. Are there too many for you to keep up with, or do you want to see more? Which upcoming superhero movie are you most looking forward to, and why? Do you think they need more Deadpool-style humour, or do you prefer the grittier approach of films like Batman V Superman? Whatever your take on the state of our superhero genre, we want to hear your thoughts!