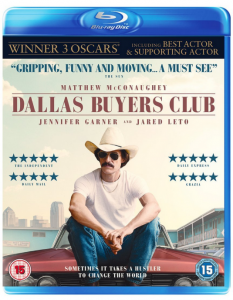 This Blu-ray Monday we’re giving you the chance to get your hands on one of the most critically acclaimed movies of the year so far, Dallas Buyers Club.

Matthew McConaughey gives a deeply moving performance as Ron Woodrof, a redneck cowboy and self-confessed homophobe diagnosed with Aids in the 1980s. When Ron’s doctor gives him only thirty days to live, he desperately seeks out alternative medicines. On hearing about AZT, a new drug not yet approved in the US, he sets up a “buyers club”, where HIV positive patients can buy the new medicine. McConaughey’s stunning performance is backed up by an Oscar winning Jared Leto and Jennifer Garner.

Matthew McConnaughey won an Oscar for his performance as the Texan cowboy. So this week we want to hear who you think the greatest on screen cowboy of all time is? Is it an old school star from a traditional spaghetti Western like John Wayne, Clint Eastwood or Steve McQueen? Or maybe it is an actor who has put a modern twist on the traditional cowboy, like Jamie Foxx’s Django in Django Unchained, Heath Ledger’s appearance as Ennis Del Mar in Brokeback Mountain, or Tom Hank’s portrayal of Woody in Toy Story? With so many examples to choose from, we are excited to hear your suggestions!