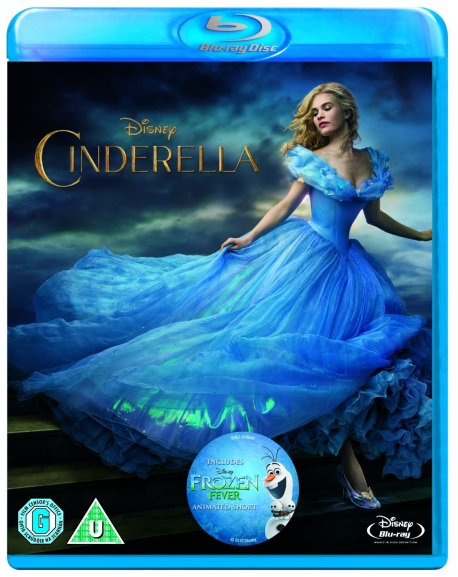 For this week’s Blu-ray Monday, we’re giving away Cinderella, the Disney live-action remake of the original 1950 animated classic.

Cinderella is one of the world’s most timeless and enduring fairy tales. Starring Lily James, Cate Blanchett and Helena Bonham Carter, Cinderella tells the story of young Ella, whose father remarries after her mother tragically passed away. Ella welcomes her new stepmother in to her home, along with her two daughters, Anastasia and Drisella. However, when her father is killed, she is taken in to the care of her stepmother, who forces her to become a servant, waiting on her and her two daughters, who mercilessly dub her as “Cinderella”.

Cinderella’s fortunes begin to change when she meets a charming stranger in the woods, who she believes is an apprentice at the palace, but is in actual fact the Prince. When the King summons all the maidens in the land to attend a royal ball, Cinderella hopes to once again meet her dashing stranger. But when her stepmother forbids her from attending and destroys her dress, only a beggar woman with a pumpkin, some mice and a magic wand can help…

Cinderella looks beautiful on Blu-ray Disc, taking the fifties classic and bringing it bang up to date with a bright colours and a crisp, clear soundtrack. It also comes loaded with special features, including a behind-the-scenes look at the dresses, a documentary about Cinderella, and an exclusive Frozen short film.

A number of animated classics have been remade in live action over the last few years, including Alice in Wonderland, Sleeping Beauty (Maleficent), and Snow White (Snow White and the Huntsman). Many more are on the way, including versions of The Jungle Book, Beauty and the Beast, The Little Mermaid, Dumbo, Pinocchio and Aladdin in the works. Which has been your favourite so far, and which are you looking forward to the most? Which actors would you like to see take on your favourite animated roles? Are there any other animated hits you’d like to see get the live action treatment?