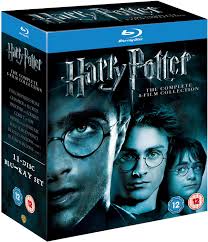 It’s the last Blu-ray Monday before Christmas, so we thought we’d mix things up a little. Rather than just give away one movie, we’re giving away the entire Harry Potter saga. That’s all eight movies over a colossal 11 discs.

It’s highly unlikely that you haven’t heard of Harry Potter, the boy wizard who turned the worlds of literature and film upside down with the unprecedented success of the stories charting his time at Hogwarts School of Witchcraft and Wizardry. Written by now legendary author J.K. Rowling, the Harry Potter series combines magic, drama, excitement and adventure to cast a spell over audiences of all ages. Starring Daniel Radcliffe, Emma Watson and Rupert Grint in the roles that made them famous, plus a who’s who of A-list British acting talent (Michael Gambon, Ralph Fiennes, Alan Rickman, Helena Bonham Carter, Robbie Coltrane, Gary Oldman and Maggie Smith to name just a few), the Harry Potter saga will go down in history as one of the most ambitious and most successful big screen franchises of all time. The Complete 8-film Collection includes all the movies plus three additional discs of bonus material. It’s the perfect family entertainment to get you through the Christmas break.

We all know Harry Potter by now – his adventures with Ron, Hermione and the gang have become famous throughout the world. So we’re keeping it simple this week – just tell us what your favourite Harry Potter moment is and why. Whether it’s defeating Nagini in the Chamber of Secrets, Hermione punching Malfoy in the face, the epic Battle of Hogwarts, the Weasley twins’ endless jokes, Harry finally getting together with Ginny or anything else, let us know in the comments!