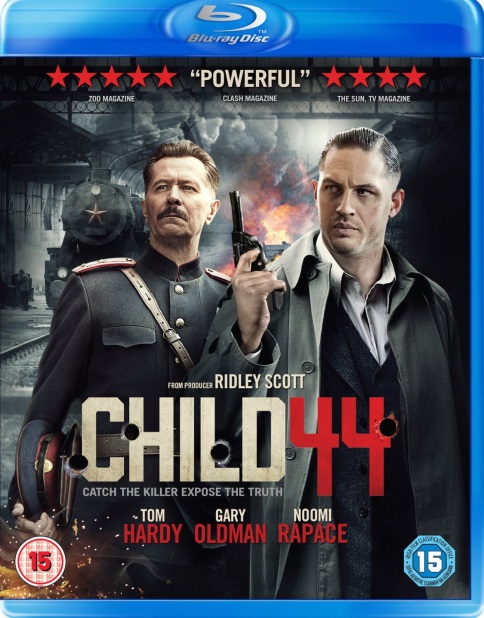 Based on the bestselling novel by Tom Rob Smith, Child 44 is set in the USSR in 1953, during a time when Stalin and his communist government ruled over the Soviet Union with an iron fist. Tom Hardy plays Leo Demidov, a disgraced member of the military police, who uncovers evidence of a serial killer that the Kremlin denies any knowledge of, as it doesn’t fit in with their utopian vision of society. Demidov must work against the oppressive communist regime to track the killer down and bring him to justice before he can strike again.

The film looks impressive on Blu-ray Disc, graded in such a way that the bleakness of the era it depicts really stands out. The film also comes with a featurette that includes interviews with the cast and crew, as well as behind-the-scenes footage.

Tom Hardy’s career has come on leaps and bounds in recent years. Since his breakthrough role as Eames in Christopher Nolan’s Inception, Hardy has been to go-to actor for a number of roles, from  Batman villain Bane, to the lead role in this summer’s blockbuster movie, Mad Max. There’s also much anticipation surrounding his forthcoming roles in films such as Legend – which documents the lives of the notorious Kray Twins – to The Revenant – which will see Hardy co-star alongside Leonardo DiCaprio. With such a broad range of roles, what would you say has been Tom Hardy’s best performance yet? And what would you like to see him do next? Perhaps he plays a better villain than he does a hero – either way; let us know what helped you make your decision.