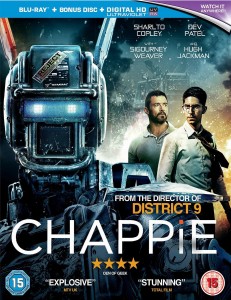 Chappie, District 9 director Neill Blomkamp’s South African mash-up of Robocop and Short Circuit, is set in the near future where crime is monitored by a mechanised police force. In reaction to mounting oppression, the people start fighting back. When one police droid is stolen and given new programming by robotics designer Deon (Dev Patel), Chappie – the first robot with the ability to think and feel for himself – is born. Schooled in gangster culture, Chappie remains an innocent at heart, comically mangling his expletives while helping out on heists between bouts of pathos-laden bedtime stories. However, as powerful and destructive forces start to see Chappie as a danger to mankind, Chappie fights to survive.

As usual you have two chances to win. For your first entry, just click on the tweet button above. For a second entry, leave a comment below in response to the following question.

Chappie is the latest in a long line of artificially intelligent stars. To mark his arrival on Blu-ray, we’d love to know about your favourite robots from the world of film and TV. You might hark back to Johnny Five, star of the Short Circuit films, marvel at Ultron’s ability to combat the might of The Avengers, enjoy Arnold Schwarzenegger’s perennial portrayal of the Terminator, harbour fond thoughts for Sonny in I, Robot or hold a flame for Data, the sentient android from Star Trek. And then there’s Star Wars’ lovable droids C-3PO and R2D2 (and BB-8!), Wall-E, Marvin from Hitchhiker’s Guide, Robocop and so many more. So who’s your favourite, and why?