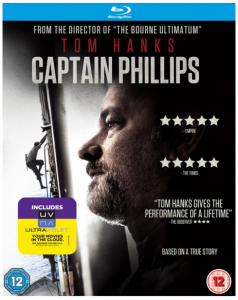 Captain Philips, “one of the year’s most thrilling cinematic voyages” and recipient of six Academy Award nominations, is the prize in this week’s Blu-ray Monday competition.

Based on the 2009 hijacking of U.S. container ship, the Maersk Alabama, by a crew of Somali pirates, this docu-drama expertly captures events as they unfold. According to critics, the movie gets nail bitingly tense, with Tom Hanks giving “the performance of a lifetime” as Captain Philips, the man in charge of the ship. The Blu-ray comes with a three part documentary examining the recent history of piracy and the practicalities of shooting this movie.

Using a handheld camera, director Paul Greengrass expertly captured the atmosphere on board the Maersk Alaska, so this week we wanted to talk about your favourite films which are set at sea. Were you wowed by other films that used cinematography to bring the sea to the big screen, like Life of Pi or Titanic? Are you a fan of action centric tales like A Perfect Storm or Kevin Costner’s Waterworld? Captain Philips features Somali pirates, but perhaps you’re also a fan of swashbuckling adventures from the likes of Captain Jack Sparrow in Pirates of the Caribbean? Let us know your thoughts in the comments below.