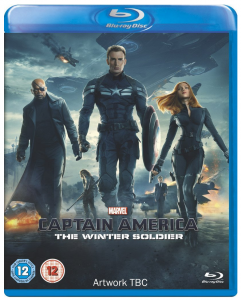 We’ve got a real treat in store for Marvel fans, as this Blu-ray Monday we are giving away Captain America: The Winter Soldier, Anthony and Joe Russo’s “dazzling” sequel to 2011’s Captain America.

After taking a deadly cocktail of chemicals designed to turn him into a super soldier, American private Steve Rogers (Chris Evans), finds himself locked into a coma. Decades later, Steve wakes up, and finds himself transformed into the super hero, Captain America. As Steve continues in his mission to protect America, he finds himself up against an unexpected and formidable enemy from the Cold War era, the Winter Soldier. This critically acclaimed follow up to Captain America: The First Avenger is the latest film from the Marvel Cinematic Universe, laying the foundations for next summer’s highly anticipated Avengers: Age of Ultron.

Captain America star Chris Evans is due to return to the role in next summer’s Avengers: Age of Ultron, and then again for Captain America 3 in 2016. However his plans beyond that are uncertain, with the actor recently suggesting that he could turn his back on acting for good.  So this week we’d like to know which actor you’d like to see take over as Captain America if Chris Evans does indeed hang up the shield. Should a new star be an established A-lister or an up-and-comer? Should some of the supporting cast, like Anthony Mackie’s Falcon, be promoted to the role? Or would you rather see Cap go into cinematic retirement for a while so we can focus on other superheroes?