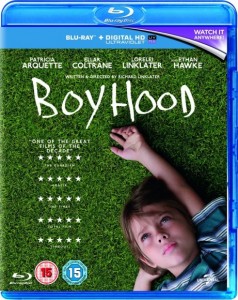 Fresh from its success at last night’s Golden Globes, Richard Linklater’s Boyhood is the prize in this week’s Blu-ray Monday competition.

Picking up Golden Globes for Best Dramatic Film and Best Director, coming of age tale Boyhood is a ground-breaking cinematic experience following the life of a family. At the centre is Mason (Ellar Coltrane), who with his sister Samantha, is taken on an emotional and transcendent journey through the years from childhood to adulthood,  raised by a divorced couple (Ethan Hawke and Patricia Arquette). The film caused a stir on its cinema release last year for its innovative creative process. Director Richard Linklater reunited the cast every year for 12 years to shoot more scenes, so as the film progresses, Mason grows from age six to 18. As well as the film, the Blu-ray includes a behind-the-scenes look at how the ambitious 12 year project was put together, as well as an extensive Q&A with the director and cast.

Boyhood’s unique depiction of a boy’s adolescent years will go down in film history as one of the most realistic on-screen portrayals of growing up. So this week, we want to know what your favourite films about childhood are. Whether they celebrate the joys of growing up (The Goonies, Home Alone, Super 8, School of Rock) or the challenges of becoming an adult (Stand By Me, Big, Billy Elliot, Empire of the Sun), let us know which made the biggest impression on you.