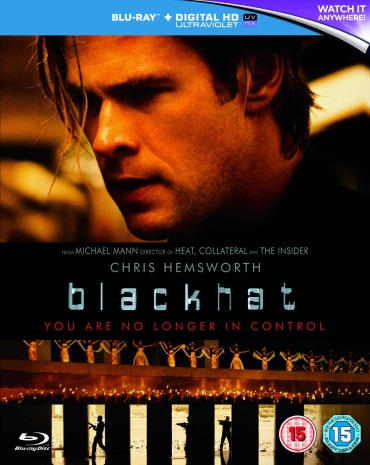 For this week’s Blu-ray Monday we’re giving away a brand new copy of Blackhat, which stars one of our favourite superheroes, Chris Hemsworth (Thor, Avengers).

Set within the world of global cybercrime, Blackhat follows a ‘white hat’ hacker and his American and Chinese partners as they hunt a high-level cybercrime network from Chicago to Los Angeles to Hong Kong to Jakarta.

Blackhat is directed by Michael Mann, who previously made some of the best thrillers of recent times (Heat, Collateral etc). In keeping with Mann’s other films, the cinematography is stunning and evocatively captures cities across the globe. As you’d expect, the visuals truly shine on Blu-ray.

As a cybercrime film, Blackhat keeps good company. Although less rooted in reality, The Matrix Trilogy was a huge success at the turn of the century. Over the years we’ve also seen Antitrust, in which Ryan Phillippe stars as young hotshot programmer, and Hackers, which follows the exploits of a group of gifted high school students – including a young Angelina Jolie and Jonny Lee Miller – and their involvement in a corporate extortion conspiracy. Further afield we’ve also seen Johnny Depp upload his personality to a supercomputer in last year’s Transcendence, Shia LaBeouf get chased by sentient surveillance system in Eagle Eye, and the Terminator franchise, perhaps the original proponent of Artificial Intelligence paranoia. But which is your favourite, and why?