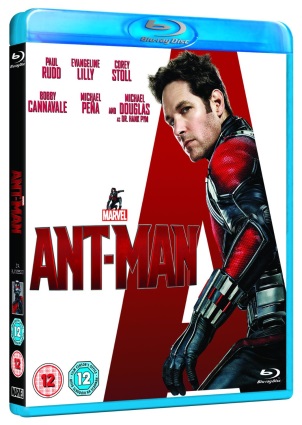 For this week’s Blu-ray Monday we’re giving away a brand new copy of Ant-Man, the latest adventure from Marvel.

Ant-Man stars Paul Rudd as master thief Scott Lang, who’s trying to turn his life around after leaving prison. However, he soon becomes involved with the mysterious Dr Hank Pym, who tricks him in to helping protect some incredible technology which has the power to shrink any object, but is at risk of falling in to the hands of the wrong people. Also starring Michael Douglas and Evangeline Lilly, Ant-Man concludes the second part of the Marvel Universe, leaving viewers ready for the third and final phase.

The Blu-ray includes a number of special features, such as a gag reel, deleted scenes and a making-of documentary.

Paul Rudd isn’t an actor you’d usually associate with superhero movies. He’s best known for his comedy roles in films such as I Love You Man, Role Models and Forgetting Sarah Marshall. Did you think casting somebody like Paul Rudd for the lead role in Ant-Man was a refreshing break from the traditional superhero actors? If so, are there any other comedy actors you’d like to see take up a superhuman role? Maybe you want to see the likes of Jonah Hill, Steve Carell and Jason Segel take the lead in a superhero movie in the future? Let us know in the comments below.