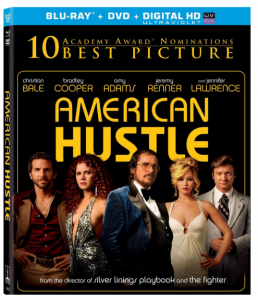 For this week’s Blu-ray Monday, we’re giving you a chance to win a copy of David Russell’s disco era deception movie, American Hustle.

American Hustle is loosely based on a true story about a group of small time con artists trying to make a fast buck in 1970s New Jersey. With a charismatic cast including Christian Bale, Jennifer Lawrence, Bradley Cooper and Amy Adams, this memorable masterpiece has received rave reviews from critics, and won Best Picture, Best Actress and Best Supporting Actress at this year’s Golden Globes. The Blu-ray features extended and deleted scenes, as well as a documentary feature on the making of the movie.

American Hustle sees its A-List cast giving “impeccable” performances as con-artists, so this week we want to know who your favourite on-screen hustler is. Did Leonardo DiCaprio charm you with his performance as real-life conman Frank Abagnale Jr in Catch Me If You Can? How about George Clooney as Danny Ocean and his team of casino scammers from the Ocean’s Eleven series? What about more classic stories of deception – like Dirty Rotten Scoundrels, Six Degrees of Separation or The Sting? Let us know your favourite in the comments below.