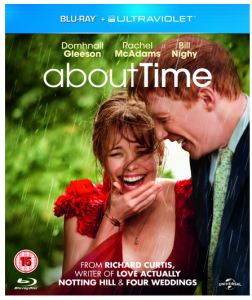 With Valentine’s Day just around the corner, this Blu-ray Monday we’re giving away a copy of writer-director Richard Curtis’ latest heart-warming romantic comedy, About Time.

On his 21st birthday, hopeful romantic Tim (Domnhall Gleeson) discovers he can travel back in time. Tim puts his new found special power to good use, so he can rewrite history and transform previous romantic nightmares into triumphs. Featuring charismatic performances from Domnhall Gleeson, Rachel McAdams and Curtis veteran Bill Nighy, critics thought you might just want to “snuggle under” this “complete charmer of a movie”. The Blu-ray comes with exciting bonus material too, including several pieces on the undisputed King of rom-com Richard Curtis, created the atmosphere and feel on set.

Ahead of Valentine’s Day, we’d love to know which romantic movies you’ve really fallen for. Perhaps you’re still enamoured by other Richard Curtis flicks; Four Weddings and a Funeral, Notting Hill, Love Actually and Bridget Jones’ Diary? Or were you charmed by cerebral love stories like the Time Traveller’s Wife and Eternal Sunshine of the Spotless Mind? Maybe you’ve got some suggestions of your own? Either way we’d love to hear from you!