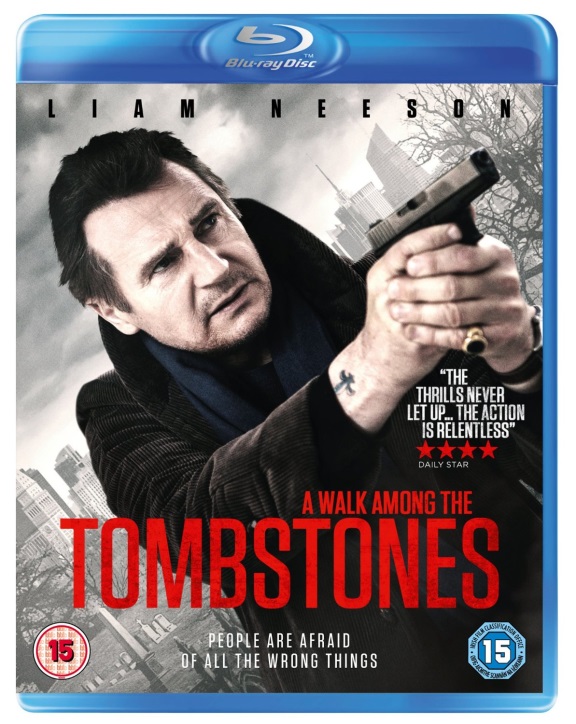 For this week’s Blu-ray Monday we’re giving away, A Walk Among the Tombstones, based on Lawrence Block’s bestselling series of mystery novels.

A Walk among the Tombstones stars Liam Neeson as Matt Scudder, an ex-cop who now works as an unlicensed private investigator operating just outside the law. When Scudder agrees to help a heroin trafficker (Dan Stevens of Downton Abbey fame) hunt down the men who kidnapped and murdered his wife, the PI learns that this is not the first time these men have committed heinous crimes…nor will it be the last. Blurring the lines between right and wrong, Scudder races to track the deviants through the backstreets of New York City before they kill again.

The Blu-ray version is newly released and satisfyingly immersive. Thick shadows and impenetrable darkness gives A Walk Among the Tombstones a suitably unsettling crime noir edge.

As always, you have two chances to win. For your first entry, just click on the tweet button above. Then for a second entry, leave a comment below in response to the question below.

Dan Stevens has made the leap from the Crawley abode to the dizzying heights of Hollywood. But his face still conjures up images from our favourite period drama. In honour of one of the UK’s best TV exports, we’d like to know who’s your favourite Downtown Abbey character? Maybe it’s Violet Crawley, Dowager Countess of Grantham with her devilish one-liners, the rebel in the family Lady Sybil Crawley (in loving memory) or the suave Matthew Crawley himself? This list may jog your memory. Or if you don’t watch Downton Abbey – following George Clooney’s appearance last year – which actor might make you tune in, if they joined the cast?