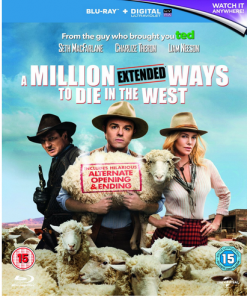 lu-ray Monday, we’ve got the outrageously funny modern day western, A Million Ways to Die in the West, up for grabs.

Directed and produced by Seth MacFarlane (creator of Family Guy, American Dad and Ted), this spoof Western sees him take the lead as sheep farmer Albert. Albert’s world falls apart after his girlfriend dumps him when he backs out of a gun fight with another man. However, when the mysterious Anna (Charlize Theron) rides into town, she helps him to rebuild his confidence and find courage.

A Million Ways to Die in the West is Seth MacFarlane’s first major big screen starring role where he actually appears in person (unlike his voice role in Ted). So this Blu-ray Monday, we want to know which other comedic talents from the world of TV you’d like to see move into movies. With Ricky Gervais planning a big screen outing for The Office’s David Brent, would you like to see other British comedians, like deadpan Jimmy Carr, grumpy Jack Dee, cheeky Jack Whitehall or loveable geordie Sarah Millican, get their own film? Or would you like to see some of the stars of America’s biggest sitcoms, like The Big Bang Theory or How I Met Your Mother get more time in cinemas? Are there any TV shows or characters that you’d like to see get a dedicated movie of their own, like Norwich’s finest DJ Alan Partridge?