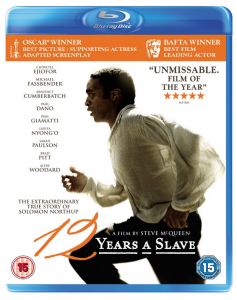 This Blu-ray Monday we’re giving you the chance to get your hands on Twelve Years A Slave, the Best Picture winner at this year’s Oscars.

The film tells the true story of Solomon Northrup, a free black man in pre-Civil War America who is abducted and sold into slavery. Facing cruelty, as well as unexpected kindnesses, Solomon struggles not only to stay alive, but to retain his dignity. An incredible true story combined with stunning performances from the cast (including award-winning Chiwetel Ejiofor, Michael Fassbender, Benedict Cumberbatch and Brad Pitt) contribute to a powerful and uncompromising but unforgettable film. The Blu-ray features an exclusive Historical Portrait Documentary, with interviews with the cast and crew as well as insights into portraying slavery on film and recreating the period setting.

The performances in 12 Years a Slave received critical acclaim, with Lupita Nyong’o taking home the Award for Best Supporting Actress and Chiwetel Ejiofor nominated for Best Actor at this year’s Oscars. With so many powerful acting performances over the past 12 months, we wanted to find out which made the biggest impression on you. Were the 12 Years performances your favourite, or did you prefer others, like Cate Blanchett’s emotive portrayal of an unhinged socialite in Blue Jasmine, Leonardo di Caprio’s tour-de-force as the Wolf of Wall Street or Matthew McConnaughey’s Oscar winning performance in Dallas Buyer’s Club? Or did you prefer lighter-hearted roles, like Will Ferrell’s much-hyped return as Ron Burgundy, or Ben Stiller’s daydreamer Walter Mitty? Let us know your favourites in the comments below.