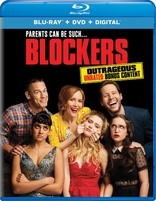 Universal Pictures Home Entertainment has officially announced that it will bring Kay Cannon’s comedy Blockers to Blu-ray on 3rd July.

Starring Kathryn Newton, Leslie Mann, John Cena, Ike Barinholtz and Graham Phillips, Blockers follows three parents who stumble upon their daughters’ plans to hook up with boys at their upcoming school prom. In a bid to stop them from sealing the deal, the parents team up to launch a covert one-night operation to stop the unthinkable.

The film is produced by Seth Rogen, Evan Goldberg and James Weaver under their Point Grey Pictures banner, so you know you’re in for a laugh-out-loud experience. The Blu-ray also comes with a number of special features, including audio commentary by director Kay Cannon, deleted scenes, gag reel and more.