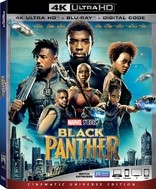 Walt Disney Home Entertainment has officially announced that it will release Ryan Coogler’s Black Panther on Blu-ray and Ultra HD Blu-ray on 15th May.

Chadwick Boseman stars as T’Challa, who returns home to the African nation of Wakanda to take his rightful place as king following the death of his father. But when a powerful enemy appears, T’Challa’s role as king – and Black Panther – is tested as he’s drown into a conflict that puts the fata of Wakanda and the entire world at risk. Faced with danger, the young king must rally his allies and release the full power of Black Panther to defeat his foes and secure the safety of his people.

The Ultra HD Blu-ray also comes with a bundle of special features, including never-before-seen extras, deleted scenes, making-of featurettes and much more. Also included are a roundtable discussion with “Black Panther” filmmakers and writers; a featurette tracing the countless connections between heroes, characters and storylines within the Marvel Cinematic Universe; and an exclusive sneak peek at Ant-Man and the Wasp.