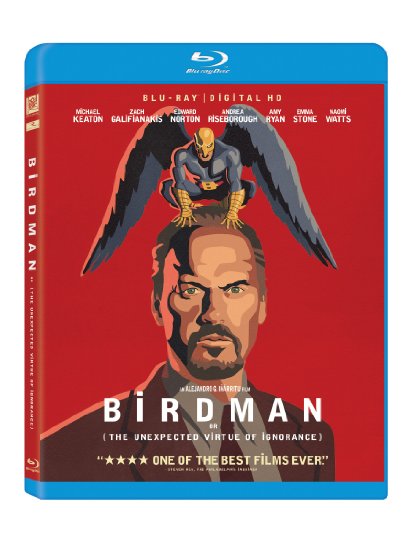 Birdman (or The Unexpected Virtue of Ignorance) won the 2015 Oscar for Best Picture; and rightly so. It’s an artful black comedy that tells the story of a washed-up former action hero Riggan Thomson (Michael Keaton), and his attempt to restart his career on Broadway in an ill-conceived adaptation of a Raymond Carver story. Everything falls apart from there. In the days leading up to opening night, Thomson battles his ego and attempts to recover his family, his career, and himself.

Intense method actor Mike (Edward Norton) hijacks the play. Riggan’s girlfriend (Andrea Riseborough) reveals her pregnancy and Riggan himself slowly loses his mind – giving in to the very voice of the character Birdman (Benjamin Kanes) ringing in his ears.

This is by and large a stunningly beautiful high definition presentation. Despite the use of handheld cameras there’s very little “jiggly cam” on display here, and the result is sharp and clear. While a lot of the film takes place in very dimly lit backstage environments, shadow detail remains strong, and in close-ups, fine detail is often impressive.

Birdman will be available on Blu-ray from May 18th. Supplements include a behind-the-scenes look at the film’s production with on-set footage, and cast & crew interviews; a discussion on the movie’s fluid visual style, characters, themes, effects, and sets, as well as a snapshot at the rehearsal process. More information can be found on High-Def Digest.