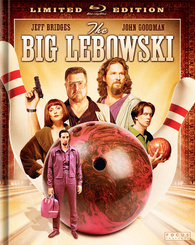 Universal Pictures will be celebrating the twentieth anniversary of the Cohen Brothers’ ever-popular cult classic The Big Lebowski with a brand new 4K Ultra HD Blu-ray release of the film, available for purchase from October 16th.

Jeff ‘The Dude’ Lebowski is one smooth guy whose life gets a bit roughed up after being mistaken for Jeffrey Lebowski, who just so happens to be The Big Lebowski. After a case of mistaken identity, the Dude has his looks tampered with and his precious rug peed on. In search of recompense, The Dude tracks down his namesake and in a strange turn of events is offered a job by The Big Lebowski. The boss’s wife has been abducted and he needs a reliable man to pick up the pieces. The Dude must fulfil his role aided by his not so trusty crew Walter Sobchak, a Vietnam vet and the most stupid of them all, Donny. His chances aren’t looking good.