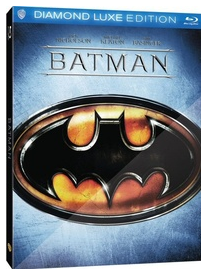 Tim Burton’s enduring and iconic 1989 movie, Batman, will be celebrating its 25th anniversary later this year with a ‘Diamond Luxe’ Edition on Blu-ray.

Long before Val Kilner, George Clooney, Christian Bale and Ben Affleck took on the role, Michael Keaton starred as the original modern big screen Batman. Sweeping aside the camp 1960s TV series, Batman takes a dark turn in this drama about crime, greed and power. Jack Nicholson puts in a brilliant performance as Batman’s nemesis, the maniacal Joker, and Kim Basinger’s portrayal of Batman’s love interest, Vicki Vale, helped to kick start her acting career. The movie is set to music by Prince, and it also won the Oscar for Best Art Direction, so we are sure it will look and sound spectacular on Blu-ray.

The Blu-ray comes with an all-new in-depth feature called Batman: The Birth of the Modern Blockbuster, which looks at how the film’s marketing and merchandising set the tone for a new breed of mega-blockbusters. The disc will also include the bonus features from previous releases of the film.

The European release date is still to be confirmed, so head to Blu-ray.com for more information.