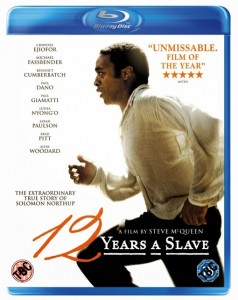 One of the biggest success stories from the 2014 awards season, 12 Years A Slave, is due to hit Blu-ray across Europe from May 12th. The winner of Best Picture at both the Oscars and the BAFTAs, director Steve McQueen’s unflinching look at slavery in America’s Deep South is one film fans won’t want to miss.

The film tells the true story of Solomon Northrup, a free black man in pre-Civil War America who is abducted and sold into slavery. Facing cruelty, as well as unexpected kindnesses, Solomon struggles not only to stay alive, but to retain his dignity. An incredible true story combined with stunning performances from the cast (including award-winning Chiwetel Ejiofor, Michael Fassbender, Benedict Cumberbatch and Brad Pitt) contribute to a powerful and uncompromising but unforgettable film.

When it arrives on Blu-ray, 12 Years A Slave will come with a range of additional features, including features on the filmmaking team and the score, as well as a Blu-ray exclusive Historical Portrait Documentary. This exclusive documentary includes interviews with the cast and crew as well as insights into portraying slavery on film and recreating the period setting.

For more details, head to Blu-ray.com.