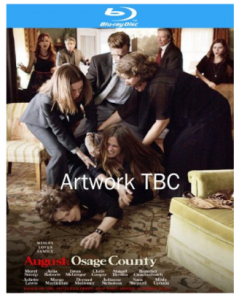 Anchor Bay Entertainment and The Weinstein Company have confirmed the special features for one of the most star studded films released so far this year, August: Osage County.

Based on Tracy Lett’s Award winning Broadway stage play, this film is “a showcase of talent”, and features knockout performances from Meryl Streep, Julia Roberts, Ewan McGregor, Benedict Cumberbatch and Dermot Mulroney. The story is centred on a highly dysfunctional family who are figuring out the best way to cope after their father drowns himself.

Coming complete with a featurette on how to write from stage director Tracy Letts, an audio commentary with director John Wells and deleted scenes, we’re sure this is one Blu-ray fans of the stage production will be keen to get their hands on.

To get the full low-down, head over to Blu-ray.com.