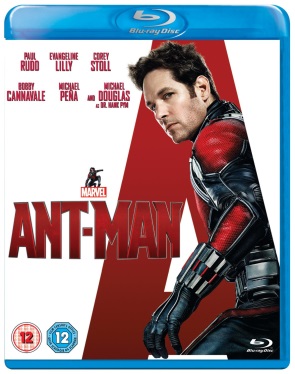 The final film of Marvel’s Phase Two, Ant-Man, is set to be released in the UK on 30th November.

Starring Paul Rudd, Michael Douglas and Evangeline Lilly, Ant-Man concludes the second part of the Marvel Universe, setting viewers up for the third and final phase. Paul Rudd plays Scott Lang, a master thief who’s trying to turn his life around after leaving prison. However, he soon becomes involved with the mysterious Dr Hank Pym, who tricks him in to helping him protect his spectacular shrinking technology, which is at risk of falling in to the wrong hands.

The Blu-ray will include special features such as “The Making of an Ant-Man Sized Heist”, various deleted scenes and a gag reel.

Check out the trailer here: