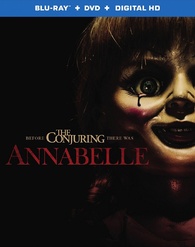 Creepy dolls have long held a particular place in horror fans’ hearts, and the latest malevolent plaything, Annabelle, is heading to Blu-ray in January.

Warner Bros’ Annabelle, a spin-off from massive horror hit The Conjuring, sees expecting parents Mia and John buy a doll called Annabelle for their soon to be born baby. But Annabelle isn’t an ordinary doll. It quickly becomes apparent that there is something very wrong with the doll, which appeared as one of Ed and Lorraine Warren’s trophies in The Conjuring. It’s alive somehow, and moves about when no-one’s looking – and things get worse from there.

The Blu-ray will include special features including deleted scenes and a number of documentaries looking into the making of the film and the history of demonic possession.

If you like hiding behind the sofa, Annabelle could be the perfect Blu-ray with which to start 2015. Blu-ray.com has more details.