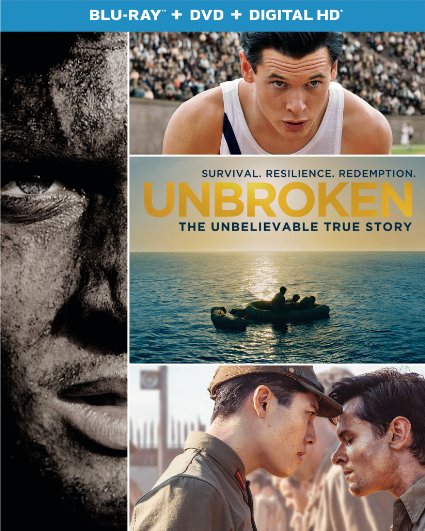 Unbroken, Angelina Jolie’s WW2 biopic tells the true story of Louis Zamperini (Jack O’Connell), an American Olympian’s struggle to survive: firstly as a bombardier in a near-fatal air crash; during a harrowing 47 days on a raft, and as a prisoner in a Japanese war camp. He is revered for his refusal to use his fame to satisfy the demands of his enemies. The film is based on the book of the same name by Laura Hillenbrand (who also wrote Seabiscuit).

This is a graceful and uplifting war drama and a testament to the human spirit’s unswerving commitment to sustain itself and maintain integrity at all costs. Jolie lets the story speak for itself and seems more assured in her directorial craft compared to previous projects.

According to a review, the Blu-ray transfer is ‘triumphant’. The release contains a handful of deleted scenes and featurettes, including a thee-part feature of the long wait to transfer to film (Hillenbrand’s work on her novel, Jolie’s attachment to the project, and Louis Zamperini’s involvement in the project and his hope for the story); a detailed look back at Zamperini’s life and a cast and crew concert Featuring Miyavi.

Unbroken will be heading to Blu-ray on 4th May. More information on the features can be found on Blu-ray.com.