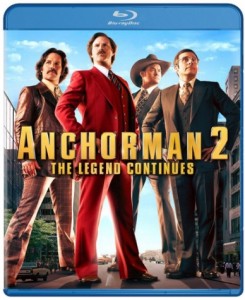 One of the most hotly anticipated sequels of recent years, Anchorman 2, will arrive on Blu-ray in the UK from April 28th. Fans should get excited because in addition to the version seen in cinemas, the Blu-ray will also include an unrated version and the alternate cut that just hit cinemas.

It’s been over ten years, but at last top rated news anchor, Ron Burgundy (Will Ferrell) is back. This laugh-out-loud funny movie picks up in the mid-80s, as Ron’s down, out and coming to terms with a failed career. One day, he’s approached by a broadcaster to run a 24 hour news show. Ron comes up with a completely crazy new idea to put the show on the map, but will he be successful? A real treat for Burgundy fans, “the madness is turned up to eleven and the whole cast are on form” in this movie.

In addition to the three different cuts of the film, the Blu-ray will come with over four hours of special features, including some extra comedy sketches with the cast and a selection of deleted scenes.

If you need further details, head over to Cinema Blend.com.