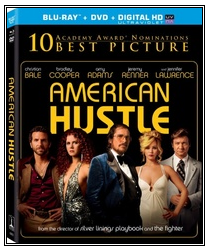 It’s still in cinemas, but Sony has confirmed the special features for one of the canniest and most sophisticated movies released this year, American Hustle.

A disco-era deception movie, this film is loosely based on a true story about a group of small time con artists trying to make a fast buck in 1970s New Jersey. With a charismatic cast including Christian Bale, Jennifer Lawrence, Bradley Cooper and Amy Adams, this “memorable masterpiece” has received rave reviews from critics, and is tipped to do well at the Oscars, where it’s been nominated for Best Picture, Best Actor and many more.

Mastered in 4K, the Blu-ray is sure to look as slick as the performances from the film’s outstanding cast. The Blu-ray will also come with extended and deleted scenes, as well as documentary feature The Making of American Hustle.

A European release date hasn’t been confirmed yet, so check out HighDef Digest for more details.