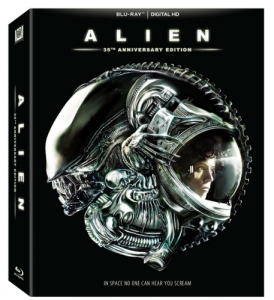 Ahead of the 35th anniversary of the classic sci-fi horror movie, Alien, Twentieth Century Fox  has announced the release of an all new Blu-ray Edition of the movie.

According to critics, director Ridley Scott redefined the parameters of sci-fi and set the benchmark of extra-terrestrial horror in this thriller. In the role that launched her career, Sigourney Weaver stars as Officer Ripley, one of the crew on board a commercial spaceship which has been infiltrated by a terrifying alien life form.

The Blu-ray includes both the 1979 theatrical version and the 2003 director’s cut on Blu-ray, along with audio commentaries with the director, cast and crew, as well as deleted and extended scenes.

A UK release date hasn’t  been confirmed yet, so checkout Blu-ray.com for more information.