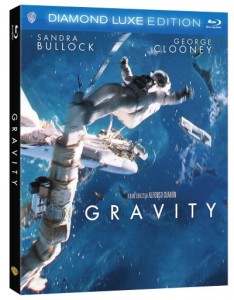 Warner Bros will be releasing Gravity: Diamond Luxe Edition, one of last year’s biggest hits, on Blu-ray on 10th February.

The Blu-ray will feature 1080p video, Dolby Atmos sound, and three new special features including a “Silent Space Version” so fans can experience the film without music and get a sense of what the events of the movie might actually sound like in space. The overall effect should be quite eerie.

Combined with the benefits of Blu-ray’s high definition and Atmos Sound, which fills every dimension of the room; the stripped down version will give viewers the closest sensation possible of hurtling through space.

Viewers, on this unique experiment, will be joined by seasoned astronaut Matt Kowalsky and medical engineer Dr. Ryan Stone as they struggle to survive against the odds when debris collides into the shuttle and kills the rest of the crew.

High-Def Digest has the latest specs.