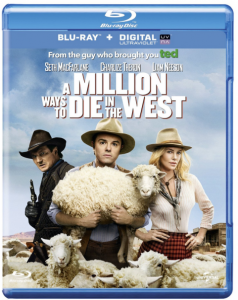 Seth MacFarlane’s outrageously irreverent Western comedy, A Million Ways to Die in the West, will hit Blu-ray shelves from the 6th October.

Directed and produced by MacFarlane (creator of Family Guy, American Dad and Ted), this spoof Western also sees him take the lead as sheep farmer Albert. Albert’s world falls apart after his girlfriend dumps him when he backs out of a gun fight with another man. However, when the mysterious Anna (Charlize Theron) rides into town, she helps him to rebuild his confidence and find courage.

The Blu-ray comes with some laugh-out-loud funny bonus content, including extended, deleted and alternate scenes, a gag reel, and an unrated commentary with MacFarlane. If you’re a fan of the outrageous comedy from Family Guy, this should be one for you.