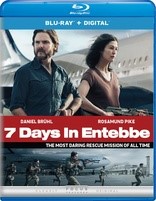 Universal Pictures Home Entertainment has officially announced that it will release José Padilha’s latest project 7 Days in Entebbe on Blu-ray on 3rd June.

The film stars Daniel Brühl, Rosamund Pike, Eddie Marsan, Ben Schnetzer, Mark Ivanir, Kamil Lemieszewski and Brontis Jodorowsk, and follows an act of terrorism that leads to one of the most daring rescue missions ever attempted. Set in 1976, 7 Days in Entebbe follows the real-life story of Operation Entebbe, launched after a passenger aircraft is taken hostage by terrorists and forced to land in Uganda. As the passengers become political bargaining chips and a diplomatic solution becomes increasingly unlikely, an elite squad of commandos hatch a fearless plot to rescue the hostages before time runs out.

The film comes with three special features – a look at the Operation Entebbe team, a feature looking the making of the raid, and an additional dance sequence.