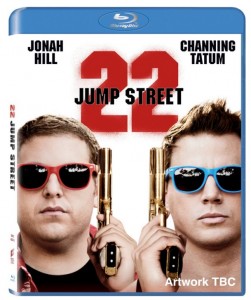 The special features for the Blu-ray edition of the smash hit comedy sequel, 22 Jump Street, which is due to hit shelves from the 17th November, have been confirmed by Sony Pictures.

From Hollywood’s hottest directorial duo, Phil Lord and Christopher Miller (21 Jump Street, The Lego Movie), 22 Jump Street sees Schmidt (Jonah Hill) and Jenko (Channing Tatum) return as undercover cops looking out for crime in unlikely places. This time the dynamic duo is sent to look for illegal activity at an online university. However, after the pair fall in with different crowds, they begin to question the nature of their friendship. The movie wowed critics, and Jonah Hill and Channing Tatum were dubbed “Hollywood’s freshest comedy duo” by the Globe and Mail.

The Blu-ray comes jam packed with extras, including several which look at the comedic chemistry between Channing Tatum and Jonah Hill, and a hilarious piece about ad-libbing on set.  As if that wasn’t enough, there will also be seventeen deleted and extended scenes, and an audio commentary with the directors and stars.