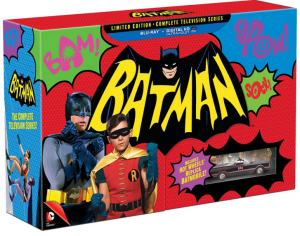 Warner Bros unveiled some utterly “bat-tastic” news this week, with the announcement that all 120  episodes of the iconic 1960s Batman TV show will be available on Blu-ray from the 10th November.

DC Comics’ Batman is now the stuff of legend, but if you haven’t heard the story before, the TV show focuses on Bruce Wayne (Adam West), a.k.a. Batman, an American billionaire who dons a bat-themed costume by night to tackle wrongdoing on the streets of Gotham. This series is often hailed as the TV show which turned the Caped Crusader and his trusty sidekick Robin into the modern popular culture icons they are today, and introduced the Batmobile, Batcycle, Batboat, and the Batcopter for the first time ever.

The series has been fully remastered in HD, and the Blu-ray is set to come with an exclusive replica Batmobile, and an episode guide.

In anticipation of the release, Warner Bros has launched an exclusive advert, which you can check out here.