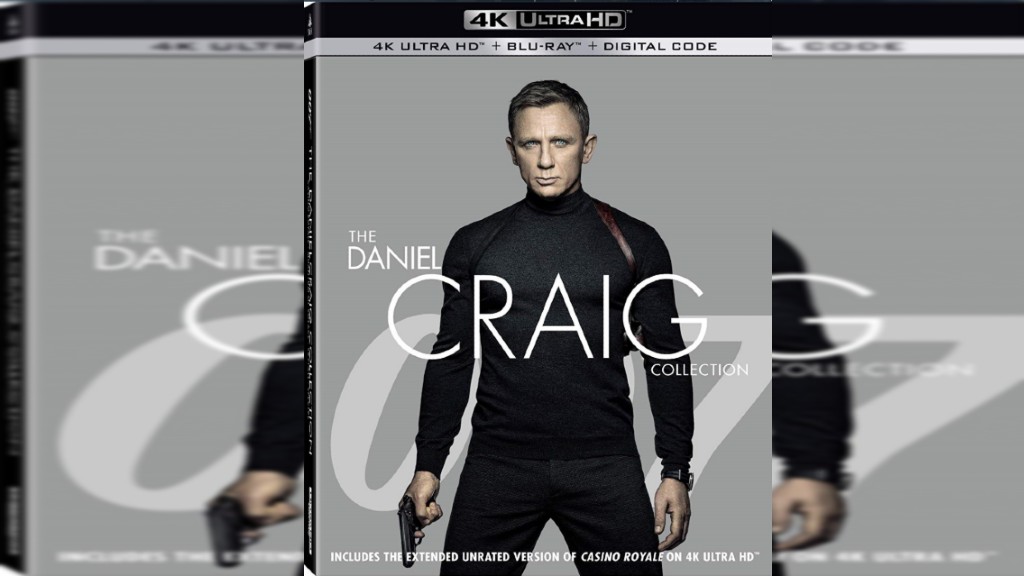 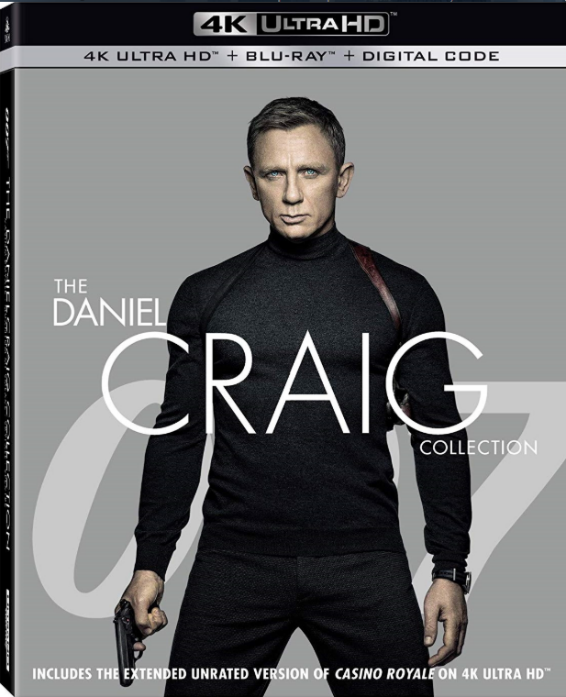 Metro Goldwyn Mayer (MGM) and Twentieth Century Fox Home Entertainment have announced The Daniel Craig Collection, the complete collection of the four James Bond films starring Daniel Craig as 007, which will be available for the first time on 4K Blu-ray on October 22nd. Casino Royale, Quantum Of Solace, Skyfall, and Spectre will be available to own as a Collection for the ultimate at home movie-watching experience. The release features the extended unrated version of Casino Royale and includes select special features on Casino Royale and Skyfall.

From his introduction in Casino Royale through to his most recent mission in Spectre, Daniel Craig as Bond has experienced explosive action and adventures while his character crisscrossed the globe in a non-stop quest for justice.

Craig is currently in production on his fifth installment as James Bond in the franchise’s highly-anticipated 25th feature film NO TIME TO DIE from Albert R. Broccoli’s EON Productions, Metro Goldwyn Mayer Studios (MGM), and Universal Pictures International, which is set for U.S. theatrical release on April 10, 2020.

Synopsis: Casino Royale introduces James Bond (Daniel Craig) before he holds his license to kill. But Bond is no less dangerous, and with two professional assassinations in quick succession, he is elevated to “00” status. “M” (Dame Judi Dench), head of the British Secret Service, sends the newly promoted 007 on his first mission that takes him to Madagascar, the Bahamas and eventually leads him to Montenegro to face Le Chiffre, a ruthless terrorist financier, in a high stakes poker game at the Casino Royale. “M” places Bond under the watchful eye of the Treasury official Vesper Lynd (Eva Green). At first skeptical of what value Vesper can provide, Bond’s interest in her deepens as they brave danger together, and even at the hands of Le Chiffre. The marathon poker game proceeds with dirty tricks and violence, raising the stakes beyond blood money and reaching a terrifying climax.

Synopsis: Following the death of Vesper Lynd, James Bond (Daniel Craig) makes his next mission personal. The hunt for those who blackmailed his lover leads him to ruthless businessman Dominic Greene (Mathieu Amalric), a key player in the organization which coerced Vesper. Bond learns that Greene is plotting to gain total control of a vital natural resource, and he must navigate a minefield of danger and treachery to foil the plan.

Synopsis: When James Bond’s (Daniel Craig) latest assignment goes terribly wrong, it leads to a calamitous turn of events: Undercover agents around the world are exposed, and MI6 is attacked, forcing M (Dame Judi Dench) to relocate the agency. With MI6 now compromised inside and out, M turns to the one man she can trust: Bond. Aided only by a field agent (Naomie Harris), Bond takes to the shadows and follows a trail to Silva (Javier Bardem), a man from M’s past who wants to settle an old score.

Synopsis: A cryptic message from the past leads James Bond (Daniel Craig) to Mexico City and Rome, where he meets the beautiful widow (Monica Bellucci) of an infamous criminal. After infiltrating a secret meeting, 007 uncovers the existence of the sinister organization SPECTRE. Needing the help of the daughter of an old nemesis, he embarks on a mission to find her. As Bond ventures toward the heart of SPECTRE, he discovers a chilling connection between himself and the enemy (Christoph Waltz) he seeks.